Cooper, the Blog, and some Raph...

I'm pretty worried about my dog. His name is Cooper, he's 9, and he's a toy poodle. He's the coolest dog in the world (I know every dog owner says that about their dog, but in this case, it just so happens to be true), but for the past four days he's been really sluggish, won't eat, and at times throws up a brownish-orange foamy goo, with tiny pieces of hair mixed in. I've got a vet appointment for him on Monday and I'm hoping everything checks out fine and they say he's just got a bug of some kind. It's been pretty rainy here, so it wouldn't surprise me if he ate something growing wild in the backyard. He's like that...eats anything that looks or smells like food. It doesn't have to be both. One or the other is good enough.

Right now he's laying on my arm, so I'm literally typing with one arm on lockdown. I've owned dogs before, and I've been around a lot of dogs--I've always considered myself a dog person--but I've never had a bond with a dog like I have with Cooper. He's made it clear that I'm his person, he wants to be with me at all times (without being possessive or aggressive). He's either in my lap or at my feet, and rarely anywhere else. I'll stop rambling on about how great he is, I guess. With some luck, his visit on Monday will put an end to my worrying.

On a lighter note, been sprucing up the old blog. Been meaning to do it for some time really, just never took the time to drop in the changes. I like the fact that Blogger has brought back the option of dropping a widget between the header and the body sections of the blog. It's perfect to doing a webcomic or placing ads and the like. I seeing how it looks with a Cracker Ace page up there (if you don't see it, don't worry you're not crazy, I'm only leaving it up for a few hours). Maybe when I get some free time I'll bust out some quick comic strips or something to run here for kicks. Always got ideas, just don't ever have the time to do them. I also like how you can create unique pages for different things as well, instead of everything being in posts. I think Blogger is trying to compete with Wordpress, which is a good thing. Competition means great things for the consumer...even if I don't actually pay for anything here. Anyway...

Below is a sketch of Raphael I did a few months back for my local art group, Little Carbon Robot. I had it finished in time, I just never took the time to scan it on account of being both busy, and lazy. Maybe more of the latter. Whateverthecase, it's posted now, so enjoy. 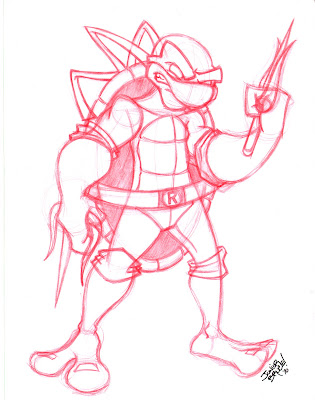