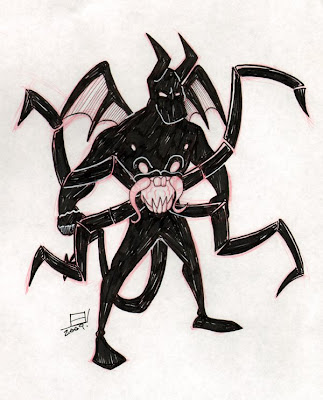 Email ThisBlogThis!Share to TwitterShare to FacebookShare to Pinterest
Labels: sketchbook 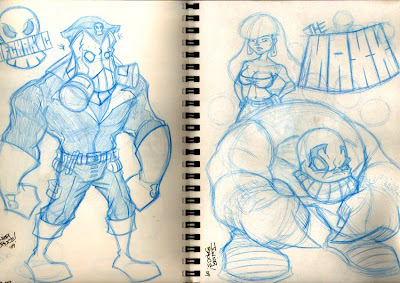 Here are a couple sketches I had in my sketchbook from a week or so back. The first is of my good bud Bryce's character, The Mechanic. The second is of Sam Kieth's The Maxx. Just workin' on keepin' things loose and fun with these. 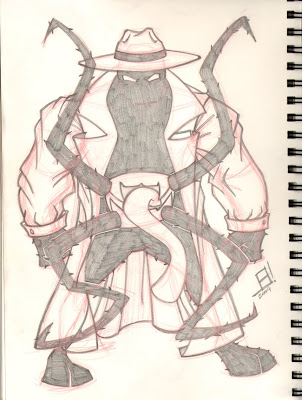 Here is my first pass at drawing MAM's (Mysterious Adventure Magazine) horror character, The Stranger (aka Darkcry). I really like the style of this character, but I got a lot of the details wrong, considering I was drawing from memory. Plus the pose is really stiff, and no fun to look at. My second pass will but much more fun and accurate.

The Mechanic is © Bryce Lee
Darkcry is © Mysterious Adventure Magazine
Posted by Junior Bruce at 4:01 AM 3 comments:

Email ThisBlogThis!Share to TwitterShare to FacebookShare to Pinterest
Labels: sketchbook 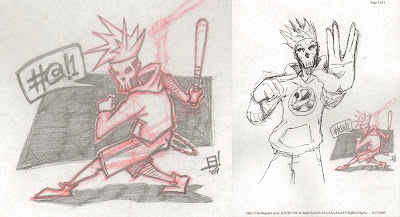 Took some time out from busy comic book page pencilin' to do a quick sketch of this little dude. The character's name is Kid Skull, and he's the creation of local Sacramento artist, Hainanu Saulque. Go check out his stuff!

Also, I'll be attending the Sacramento Drink-N-Draw tomorrow night at the Fox and Goose. If you're from or around the area tomorrow night from 8-12pm, come meet me and throw down some lines! It'll be riot. For more info, check out the official site of the Sacto DnD chapter!
Posted by Junior Bruce at 2:26 PM No comments:

Do you wanna get Brocked? Went to bed watching The Venture Bros. last night, and realized that I'd never drawn Brock Samson before. So, thought I'd give it a shot.

Can't wait for it to come back!
Posted by Junior Bruce at 9:18 PM No comments:

Divin' into the old sketchbook! 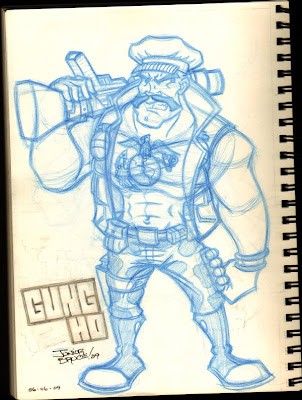 Whelp, it's been a few days since I've been able to post anything, namely because my computer caught the petulant child virus and stopped obeying my commands! At least with kids you can spank 'em, or slap 'em upside the head...if I did that with a computer, I'd just hurt myself. Anyway, I've been granted permission to use the roomies comp, so I hooked up for the scanner, installed adobe, and got to scannin' a few things.

This first sketch is right outta the ole highly neglected sketchbook. It's of my favorite G.I. Joe, Gung-Ho! As a kid, and even now as an adult, I have an affinity for straight-up badasses, and Gung-Ho may very well be the first badass I ever actively rooted for. Well, him and Mr. T. Anyway, I had a crapload of fun drawing this, and I look forward to inking and coloring it at some point for a G.I. Joe jam a buddy of mine is doing. Can't wait! 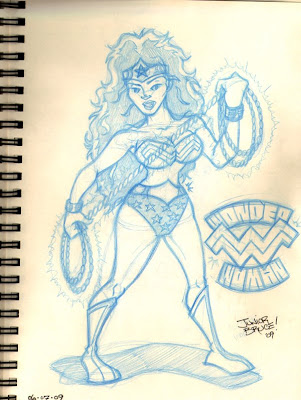 Here's another sketchbook sketch I did recently of everyone's favorite superchick with the super mammaries...Wonder Woman! Ain't drawn here in a long while, and I gotta say, I can totally see myself turning the proverbial corner when it comes to drawing females. I'm still learning, but I think I've finally figured it out...and it only took 29 and a half years! 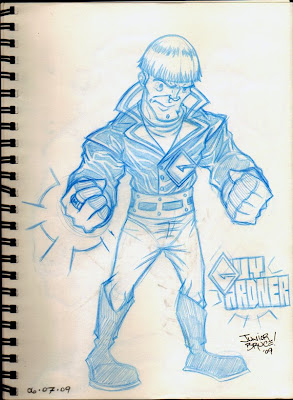 This last one here is of a character whose become somewhat of a recent favorite of mine, Guy Gardner. I remember being asked to draw this dude about a year ago for one of those 10 Free Sketch things that I never completed. Well, long overdue, here's my first ever attempt at him. I plan on drawing him again soon, as I think this pose isn't dynamic enough, but it was fun to practice trying to convey attitude, as well as working on folds in fabric as seen on his jacket. Oh, and for Guy Gardner purists, I just realized that I have him wearing a Green Lantern ring, and not the yellow ring he oughta be wearing in this incarnation...I promise not to make that mistake again.

It's been a fun couple days, even without the net. I've got a bucketload of sketches yet to scan in, but this is all I can show for today. Hope everyone digs 'em.

Take nothing for granted!
Posted by Junior Bruce at 10:16 PM No comments: