Spider-mang and his old lady... 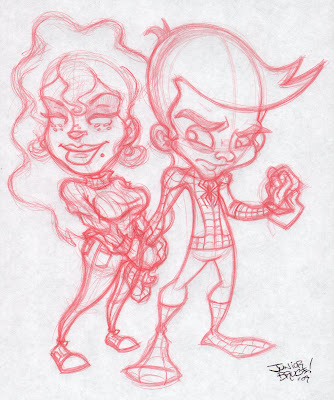 My plan this week was to do my Little Carbon Robot Challenge piece 100% digitally, just to keep practicin' with the old (NEW) tablet I bought.

But, after about seven failed attempts at something I thought I was gonna like, I decided to shelve the whole shebang until I was hit by the ole inspirado. So Monday became Wednesday, and Wednesday became Saturday, some other week days were lost in the mix somewhere along the way, and before you know it, it's early Sunday morn, and I ain't got crap to show for the challenge. So I says to myself, "Myself, what are you gonna do to rectify this sitch-e-a-shun?" And so I answers back, "Me, I'm gonna get to crack-a-lackin'!" And so, with a pencil in one hand, and a tumbler of Big Red in the other, I hammered out something I'm not all that fond of, but fond enough of to call it a day, post that shit, and move on with my life. I'm not a Spidey fan, ya'll, and this week really shows it. Drawin' Peter Parker was a pain, but I did it. I did enough of it anyways.

If I have time someday, I might ink this sucker, but I ain't holding my breath, so you shouldn't either. If anyone else out there wants to ink it, well hey, permission granted!