I've been meaning to create one of these for a while. My original intention was to go and have some t-shirts screen printed locally, and have hard copies on hand to sell...but with things being so much easier to do over the Internet, as well as my incredible lack of funds, I figure this is the best road to take for now. My goal is to create a shirt every couple of weeks, and to promote the crap out of it via this blog, twitter, facebook, deviantArt, and any other means I can find.

It kind of sucks that to make it independently, I have to pretty much be something I hate...a perpetual self promotion machine. In hip hop and World of Warcraft terms they call it "grinding." I don't like it, but I have no choice. Ain't nobody gonna stumble over anything I do, and proceed to fall over themselves to give me money for stuff...I's gotsta go outs and TAKES IT! Or at least takes what I cans. :D

So if you find me being pushy in the months to come...forgive me.

Now buy a shirt! The Undead Poultry Horde is lookin' to BEEF up its ranks! Assimilate, before it's too late, or you'll be left to face the dreaded PECK OF DOOM!

(NOTE: If anyone knows of a better t-shirt printing place online that doesn't dick you so hard monetarily, lemme know. I hate the idea of having to charge damn near $25.00 just so I can make two or three dollars on the deal. There's gotta be a better alternative out there, I just haven't seen one yet. So please, if you find one, shoot it over so I can go there instead. Thanks!)

I hate to just have a post asking people to spend money on me, so here's a couple of blog exclusive sketches I did yesterday while waiting at the DMV to renew my driver's license (oh fun times indeed). They're of Lemmy and Eddie Riggs from Brutal Legend, an incredible game worth playing. 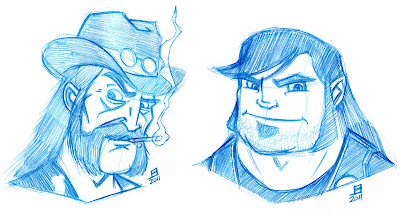 Back to work!
Posted by Junior Bruce at 1:35 PM