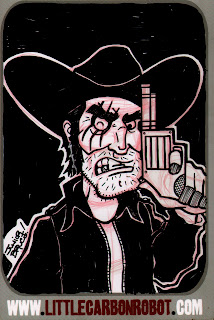 Thanks to everyone for the love and support over the loss of Cooper. I'm so glad I've got such a great group of people watching me (as I them).

Still inking like crazy. Pretty strange working today without Coop at my side. If we didn't have the new puppy, Sookie, things would probably be a lot worse emotionally. Of course, it's pretty tough to get anything done when you've got an 11 week old, 4lb peekapoo attacking your feet every chance she gets. Despite all that, though, I got quite a bit done today. Two and a half pages inked, and this sketchcard here.

The sketchcard is something I crapped out while watching "2012." Man, is that movie shitty. No offense to those who like the big dumb disaster movies of today...everybody has their thing. I prefer my disaster movies to be from the 70's, and to star Paul Newman, Gene Hackman, or George Kennedy.

The character on the card is nothing special. It's not a character I've had in my head or anything. Might tweak him up and use him as a villain for Cracker Ace or something. We'll see.

The Sac-Con is coming up this Sunday, March 7. I'm gonna be there with my Little Carbon Robot buds. I've been told we're gonna be sitting on a panel talking about what it's like to work in an art collective. I'm not exactly sure what to expect, other than a good time, and that's all I really care about. The following weekend I'll be headed with those same buds to Seattle for the Emerald City Con. I've never been there, and I'm horrifically unprepared, but it should be fun, and provide ample opportunity to meet new folks. I'll probably end up spending 80% of my time sitting at the table drawing sketchcards, or working on project stuff. I don't have a lot of free time to create a lot of non-project work, so I might not be able to fight the urge not to "work" while there. Whateverthecase, I'm definitely gonna be busy doing something.

Here's where me and the LCR Crew are gonna be Emerald. Make sure to stop by and say hello. I'm the big white guy with glasses and a Jimi Hendrix hat. I know I look scary, but I'm really not...I'm just really shy when in big groups of people (even in groups of people I know), and thus tend to look a little menacing. I promise you, I'm not mean! Yes, I'd love to meet you and chat about stuff! So come on by, or stop me on the floor...just don't talk to me in the bathroom. That's just weird. 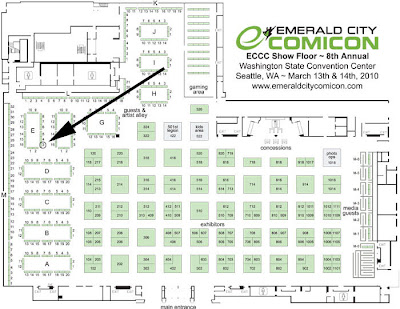