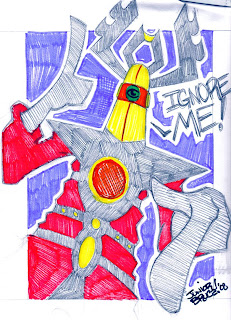 Here's a little diddy of The Grand Galactic Inquisitor, a character from "The Venture Bros."

Like the Evil Midnight Bomber What Bombs at Midnight is to "The Tick," The Grand Galactic Inquisitor is to "The Venture Bros." A classic one-shot villain, who really isn't much of a villain, but is damn fun to watch.

Went a bit nuts with the colors here. I'll probably look to do something with this down the line, just for giggles. Maybe a shot of the GGI and the Midnight Bomber, hmm?
Posted by Junior Bruce at 12:00 AM